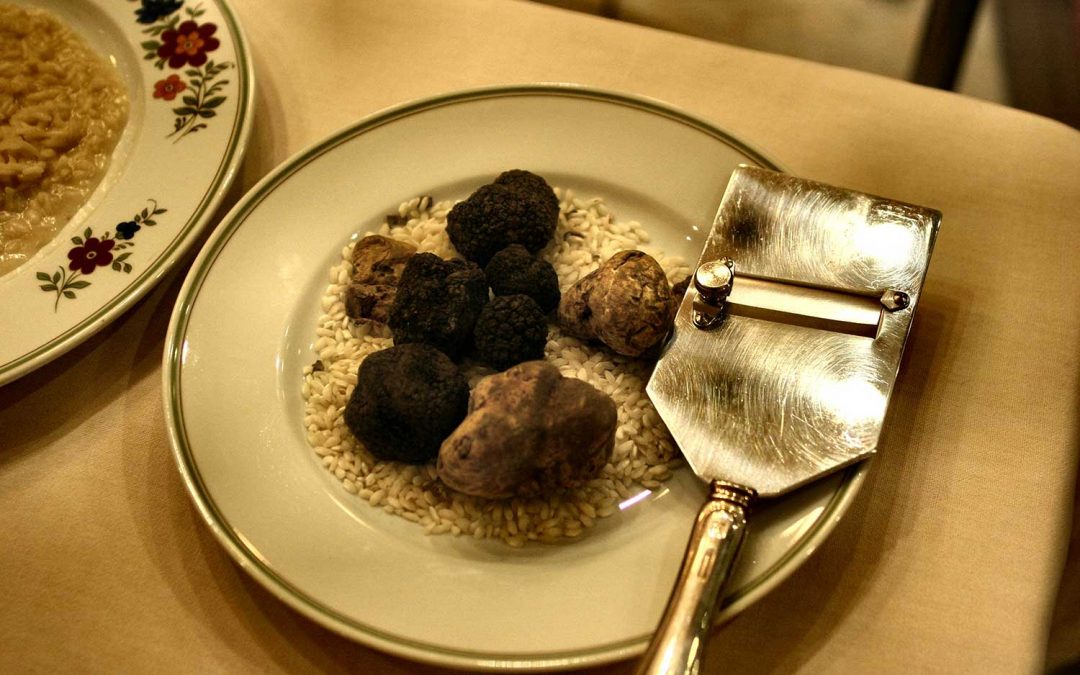 There has never been a better time to invest in truffles according to experts, as prices soar to record levels. The truffle growing regions of France, Italy and Spain have suffered a series of dry summers, limiting supply and sending global truffle prices on an upward curve. This year was the driest October for 60 years, inflating the price of some varieties by more than 100% compared to last season.

According to the long standing “Borsa Tartufo” – stock exchange of Italy truffle capital Acqualagna – the Summer Burgundy Truffle (Tuber Aestivum), a commercial variety historically abundant across much of Europe, has doubled in price from an all-seasonal 460 euros per kilo for the last two years, to a record high of 900 euros per kilogram this year. The famous white truffle (Tuber Magnatum), which grows wild in the Alba and Acqualagna areas of Italy, has suffered a 90% reduction in harvest this year, hiking prices up to a staggering 5,000 per kilo on the Borsa, a rise from highs of 3,600 and 3,800 euros per kilo wholesale in 2015 and 2016. The Black Winter Truffle (Tuber Melanosporum), another investment variety, has recently been valued at 1,850 euros per kilogram.

While the supply of truffles continues to fall – 95% of truffle production has been lost since 1903, largely as a result of changing agricultural and environmental conditions – demand for luxury foods has never been greater. The US truffle market alone grew from $4m to $30m between 2004 and 2015 and the ‘new rich’ from BRIC and MINT countries are following suit. The resulting rise in prices will mean a bright future for the best commercial truffle farmers, as the truffle becomes one of the most lucrative alternative investment options available.

There are already a number of commercial truffle farms across Europe making the most of rising prices. These include French Truffle Tree, based in Charente, France; The English Truffle Company in Dorset; Black Truffle Investments in Ireland and Truffle Farms Europe, based in the Occitanie region of southern France.

Martin Waddell, founder of Truffle Farms Europe (TFE), is cultivating 26,500 young oak trees in  the vast propagation nursery at the Institute Research and Technologia for Agronomia near Barcelona. 20,000 new trees have also been ordered, making this one of the largest truffle production farms in Europe. Sales closed in September on a share of the first 5,000 five year old trees which were released for private investors. The company plans to harvest and sell the truffle crops to global wholesale markets on behalf of their clients.

Investors can buy a share of the next batch of trees being released and can acquire from 25 trees up to 500, which costs from £10,226 to £124,947. In return they receive the price equivalent of 80% of the truffle crop during the life of the 15-year lease period and 50% of the tree sale price. The investment opportunity comes with automatic HMRC approved tax-free benefits. TFE grows the expensive black Perigord truffle (Tuber Melanosporum) and forecasts average annual returns on a wholesale return price of 500 euros, of between 18% and 24% over the 15-year period.  With the help of world renowned truffle expert Dr Marcos Morcillo, Mr Waddell has been perfecting the science of truffle production for over ten years and says his investors will soon reap the rewards.

Mr Waddell said: “When I moved to France in 2007, it was clear to me that the investment world has long been blighted by investor management greed and doomed to the boom/bust cycle that persists. As the devastation of 2008 hit home, I just felt there had to be a better, more patient way to build for the future, a way that would be ethical, ecological and sustainable. Truffle farming is one way to achieve that. The impact of two decades of dry summers on truffle productivity and prices, combined with the developing science, opened the door to an exciting, ethical investment opportunity that ticks all the boxes. I am fortunate to have clients that have believed in what we offer and they are about to be rewarded for their foresight.”

“I wanted to get a better return than the bank or the stock market and the idea of putting my money into something that gives a good return but also has some ethical benefits, really appealed. I work as an engineer in the oil industry, so I wanted to find something where I could give back and the ethical side of truffle production really appealed to me. And to be able to take the children truffle hunting on holiday is a great bonus!”