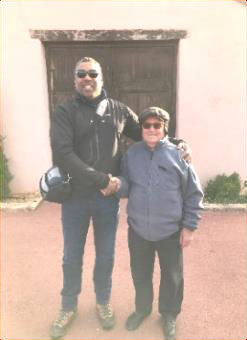 Welcome to our Winter newsletter 2017. I spent the week before Christmas in Barcelona and Teruel in Spain. I was with Marcos & Xavi at the IRTA and in the field and included a working week of workshops and site visits for prospective international plantation growers. It’s a chance for the Micologia Team to make presentations on the latest scientific findings in the truffle world. They can also show first hand, the many developing methods of plantation husbandry and management and explain the economics of the international truffle business (that’s my bit). Visits with for example, some of the largest yielding plantations and traders in the world are included. These visits are tremendous reinforcement that all the learnings and techniques we have developed will, positively maximise the yield increments that underpin our forecasts. 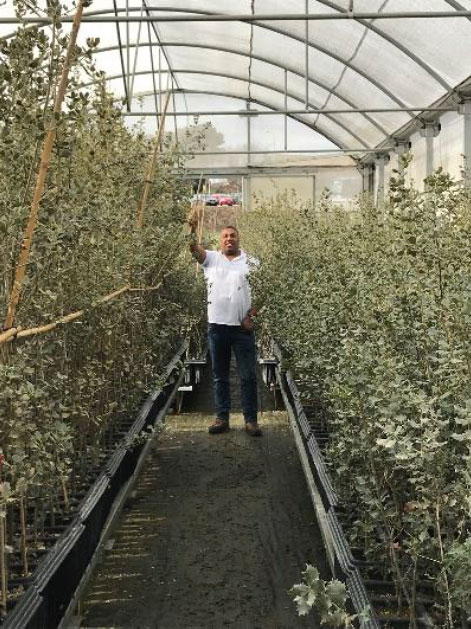 Tree Development – A visit to the IRTA would be incomplete without a thorough examination of our trees which, are in superb condition. I can also confirm that we have ordered a further 33,200 trees bringing our total holding up to 54,700. It is our intention to accelerate tree production and planting over the next 4 to 5 years. We will be planting out our first 10 hectares of 5-year-old trees in 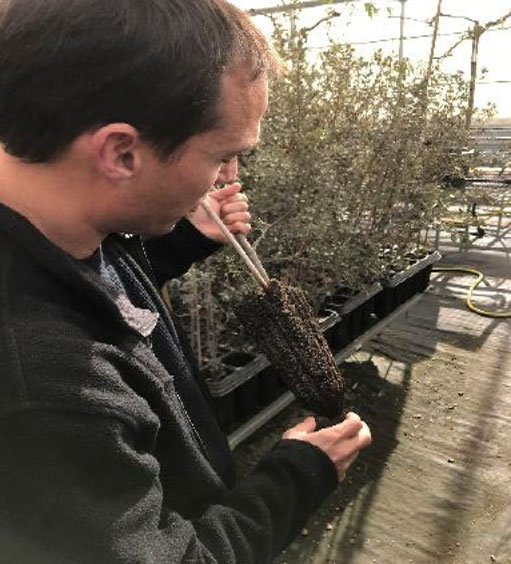 Marcos examining the
roots of a 5 YO tree

March/April 2018 and are targeting a further planting of 20 Hectares of 3-year-old trees in October/November. All these trees will receive an additional round of male spore and bacterium treatments on planting. This will ensure a continued high and healthy male spore existence in the foundation stage of the trees establishing themselves in the plantation.

Plantations/Land – I am pleased to be able to confirm to you all that on the 16th October 2017 we concluded a Lettre d’intention d’achat de bien immobilier (promise to purchase contract). This is a binding agreement on price and terms between TFE and a Vendor to conclude a sale and purchase of a 64 Hectare (158 acre) farm near Lafage in the Aude. This is not a usual contractual procedure for the purchase of property in France, but it is not uncommon in agriculture especially. It is used in a situation where a freehold transfer of land is agreed between the parties, but some aspect of the sale is blocked by a condition. In this case, a leasehold or “ fermage ” interest in the property was held by a farmer. 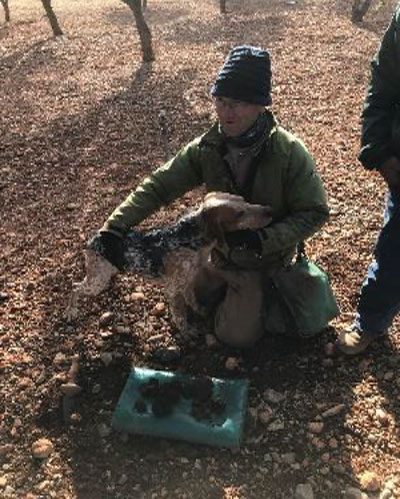 Strangely, Xavi and I surveyed, and soil tested this property over 2 years ago and we really liked it. We’ve always called it the “Donkey Farm” because in the pictures and when we arrived there were 4 lovely, friendly donkeys on the field at the top of the hill. The farmer had offered to give up his lease then and the owner and ourselves agreed terms very quickly. The farmer then changed his mind and it came off the market. About 18 months ago the agent came back to us offering the 64 hectares freehold and 17 hectares of the farmer’s freehold – in total 81 hectares. It was for a massively higher price which, on discovery turned out to be justified by the farmer as his farmhouse was now included in the sale. We’d seen it on the original visits and you could spend £150k on it and it still wouldn’t be worth half what he had bumped the price up to.

Like all things to do with farming in France there are complications. The first of which, is the cooling off period. Despite that the farmer had signed away his rights to the “fermage” there was still a period where SAFER – the eponymous private/public land agency of France would have the right to bring another farmer to the lease – only they couldn’t, since the only way you can transfer a lease (except from farmer to child) is with the agreement of the freeholder – and remember she has signed the binding promise to us. Yet we still had to “wait out” this period until the Notaire could officially register the lease as being terminated on the 16th of December. This has meant we were unable to enter in to the first official stage of buying – the Compromis de Vent . We will sign this and pay down the deposit next Thursday 11th January. At this stage, SAFER will have an opportunity to buy the land out from underneath us and they have up to 8 weeks to notify us if they choose to. (When you buy a house in town every Mayor has the same right) 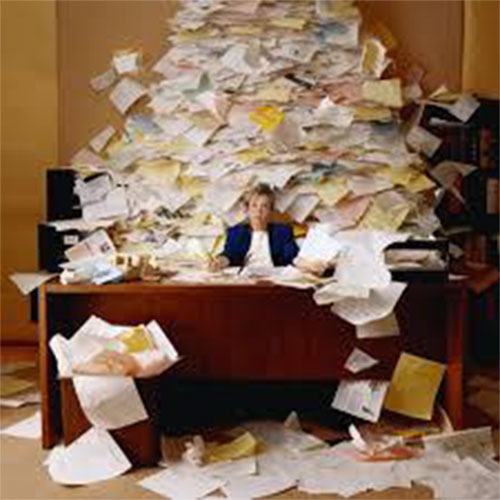 I know what’s going through all your minds reading this – THIS IS CRAZY – well yes and no….and yes. But there is a reason for this and it’s to protect agricultural land for farmers. We’re farmers so that’s to our advantage but, there’s often a sort of presumption that people who are not already farmers (including French) have some devious housing development scheme up their sleeve and this must be guarded against and that’s SAFER’s job, along with being a private land and farm agency and the public agricultural land agency valuation Board. That this sometimes means a carve up for the lads is an irrelevance. In fact, there was much lobbying to diminish SAFER’s powers, but in fact Hollande who was expected to respond to this, true to his good old leftleaning influences, actually increased their powers in the face of general outrage.

Anyway, as a result of the massive regional re-organisation mentioned in my last newsletter, bodies like SAFER exhausted their budgets in 2017. So, the general consensus is they don’t have money to go buying up land for farmers at the moment and we expect to be able to conclude our purchase in time to meet our land preparation and planting schedule. 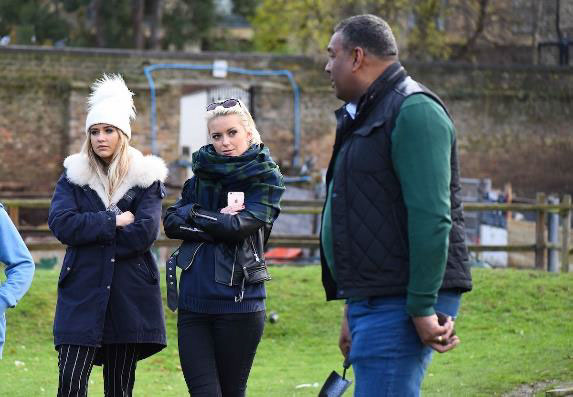 Small World – I don’t know if any of you have been following all our recent updates on things truffle. If you have you will have seen that I hosted a pop-up truffle hunting event in London for the launch a very famous UK luxury snack brand – Tyrell’s Crisps who launched a seasonal Black Perigord Flavoured crisp. https://trufflefarms.com/martin-hosts-starstudded-masterclass-london’s-first-pop-truffle-hunt/ We needed a dog so, I approached a friend who lived in the same village as we did prior to leaving Surrey for France in 2007. (Her husband and I knew each other then.) We returned there for a mutual close friend’s funeral in 2014 and it came up that we were in the truffle business. Louise looked at us with shock as it turned out she was the principal breeder of the truffle dog breed Lagotto Romagnolo in the UK. So, having called her for a contact for a dog and hunter for the Tyrell’s event in December she recommended a lady and passed me her number. I immediately recognised as being a Swanage code and this is where Christine (my wife) is from and is kind of our second home. Turned out Christine knew the lady in question from her childhood. To close the circle Sasha and her husband John, have a small truffle orchard in their place just outside Swanage and joined us and all the family for a drink on boxing day in their local village pub as we were in Swanage for Christmas.

A final coincidence – Given that it’s pretty much a certainty that I’m the only black Scotsman, growing black truffles does it come as a surprise that the neighbours to our farm at Lafage are a Scots couple……us Jock’s get everywhere! 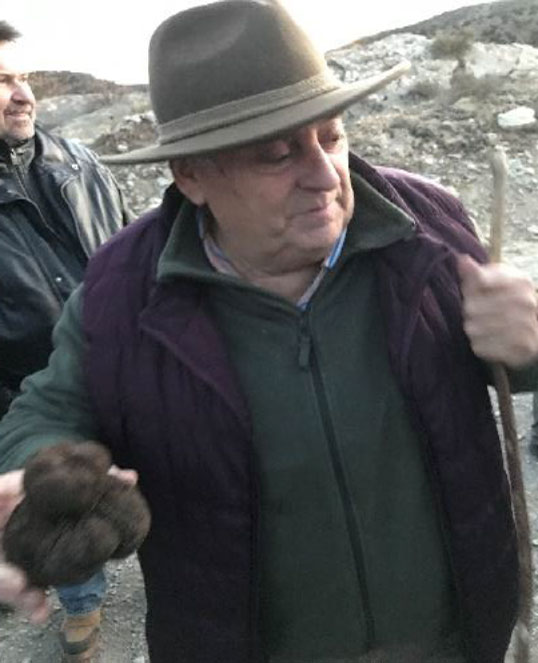 The President of the Teruel Truffle
Farmers Association with a
whopper

Forecasts and Pricing – You’re all aware that our forecasts are based on crop sale prices of a flat €500/kg. (Long run pricing of French Black Winter truffle – until the last 5 years has been €700 to €1,300 seasonally) We have retained that price point and will continue to do so as a part of prudent forecasting. However, I would like to draw your attention to some recent articles on the substantial increment on prices this last year. You’ll find more on our news pages.

Our truffle – Perigord or Black winter has been hitting wholesale highs of €1,950/kg. Below are some links to the news and events page of our website where you can find articles from the Telegraph and other leading news outlets on these price rises. I hope that you will find them enlightening and hopefully a little smug at your own cleverness for getting in early on what may prove to be an even better investment opportunity than forecast.

I’m sure that you all had a very Happy Christmas and will feel refreshed and ready to go for 2018. Let’s hope that truffles can be a great contributor to many prosperous new years to come.