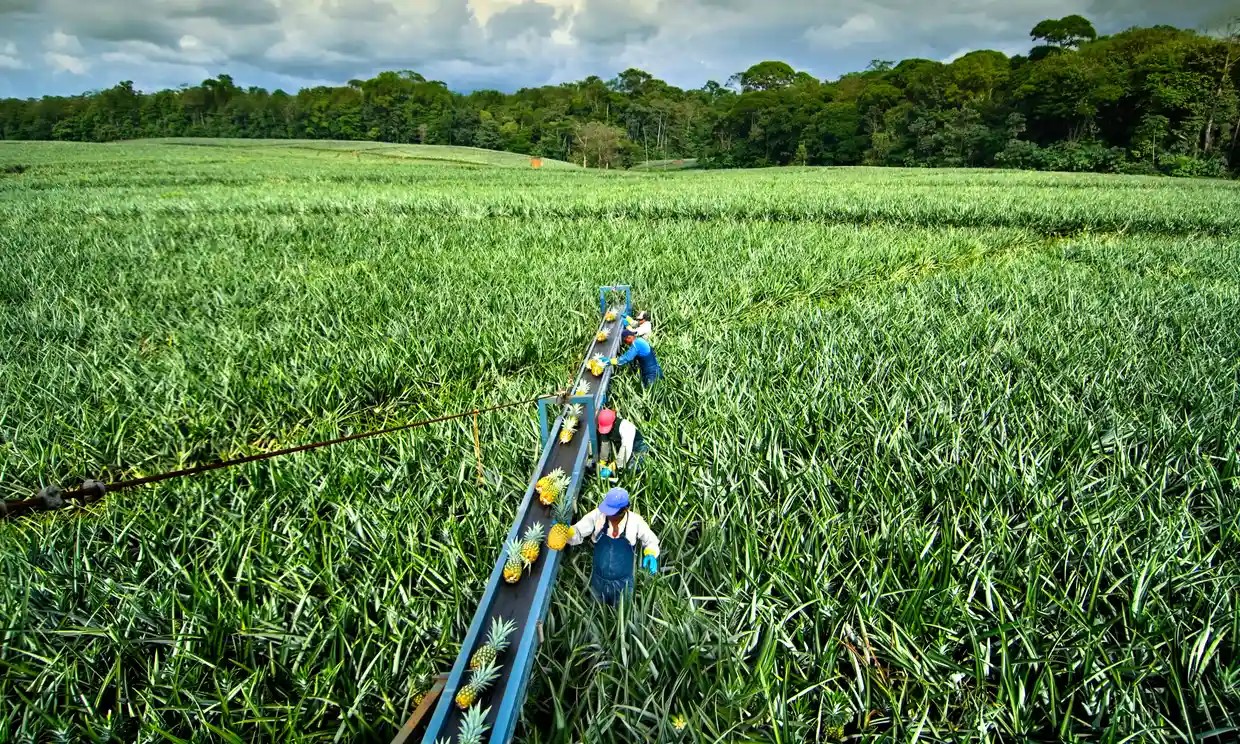 The Rainforest Alliance, one of the world’s most recognisable ethical certification schemes, is facing allegations of labour exploitation, use of illegal agrochemicals and the concealment of hundreds of undocumented workers at some of the pineapple plantations it certifies in Costa Rica.

Rainforest Alliance-certified pineapples are sold in their millions at a premium price to consumers across the UK and Europe on the promise that they have been grown and harvested according to strict ethical and environmental standards.

Costa Rica exports £730m worth of pineapples to Europe and the UK. According to the Rainforest Alliance, it has certified about 40% of farms exporting the fruit to the region.

Yet despite its ethical credentials, former workers and labour rights campaigners in Costa Rica have alleged that the Rainforest Alliance has certified plantations where serious labour abuses and the use of illegal agrochemicals has occurred.

One former manager claims that plantation owners hid more than 800 undocumented workers from Rainforest Alliance auditors. He alleges that out of 1,000 workers harvesting pineapples at his former company – a major fruit supplier operating near the Nicaraguan border – only 150 were officially employed. The others were undocumented Nicaraguan migrant workers who were denied basic labour rights.

WhatsApp messages seen by the Guardian appear to show plantation bosses alerting managers to Rainforest Alliance auditors on an inspection in March 2019.

“The auditors have to go through the main office, even if they pay a surprise visit. Then we get WhatsApp messages telling us to hide the [workers] without papers in the mountains and the barrels of chemicals we aren’t supposed to be using,” he says. The instructions also allegedly told the manager which workers to offer up for interviews with the auditors and how to stall for time.

Another manager who worked for the plantation for nearly five years says that Rainforest Alliance auditors interviewed him during the last three audits. When asked about undocumented workers and the use of illegal agrochemicals, he states that he had to lie. “If I told the truth about how many workers are undocumented and the pesticides we use, I would get fired,” he says.

His cousin worked at the same plantation as an undocumented migrant. In January he was injured on the job and later died. “Because he had no health insurance he couldn’t see a doctor. He had to go back to Nicaragua, where his leg was amputated but it was too late,” says the former manager.

Other workers and activists say that labour and environmental abuses, including unpaid wages, union suppression and the use of illegal chemicals, have also occurred at two other certified plantations in Costa Rica.

Moises Carmona, a worker at a certified plantation in the north, claims that as a union member, he is not allowed to speak with auditors. “The auditors are paid by the companies and are brought in secretly,” says Carmona. Rainforest Alliance’s website shows that plantations are financially responsible for paying the certification bodies for audits.

Outside another pineapple plantation, migrant workers told the Guardian that they are paid for what they pick and easily hired and fired. “We do not have any security,” says one worker who spoke under condition of anonymity. “But in Nicaragua it is worse. Less pay and longer hours. That’s why I’m here.”

In a statement, the Rainforest Alliance says that all of its certified plantations are required to comply with strict audits and inspections.

The organisation says its certified plantations must adhere to five “zero-tolerance” certification rules, including “no mistreatment of workers” and “no discrimination”. It also prohibits the contracting of temporary workers to eliminate or reduce pay and benefits.

When violations are found, it says certification can be suspended or cancelled.

“We are aware that some certificate holders will try to hide nonconformity during the audits,” says Ruth Rennie, director of standards and assurance at the Rainforest Alliance. “To avoid this, we rely on unannounced audits and the auditors’ team to identify the nonconformities.”

Yet labour and environmental activists say audits have little effect on many affiliated companies. Henry Picado, the president of Fecon, a leading environmental group in Costa Rica, insists that audits are not rigorous enough to reveal violations, including the use of illegal agrochemicals and undocumented workers. “The certification organisations do not have the processes in place to find or review problematic activity,” he says.

Didier Leitón, the president of Sitrap, a plantation workers’ union, claims that he has brought complaints directly to Rainforest Alliance’s certification organisations regarding the use of undocumented labourers and rights violations. “But our reports are simply not taken into account,” says Leitón. He recently posted publicly on Facebook about union suppression, and the use of undocumented workers at certified plantations.

“The problem is that auditors only have access to workers and facilities that plantation officials give them access to,” says Eva Carazo, a researcher studying the health and environmental impacts on plantation communities at the Universidad Estatal a Distancia.

“Workers are either interviewed in front of managers or fear reprisal for revealing poor conditions. The consumer sees the symbol on a piece of fruit but does not know the process behind it.”

Taken from the original article in The Guardian: https://www.theguardian.com/global-development/2020/may/29/rainforest-alliance-certifying-unethical-pineapple-farms-activists-claim