How The Truffle Broke Free Of Fine Dining 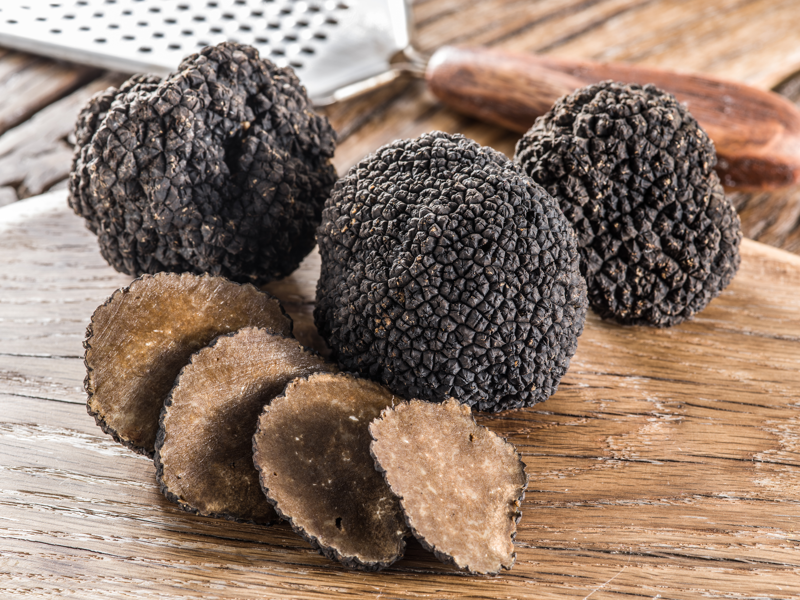 This fungus graces the plates at Michelin-starred restaurants but also appears to occupy a jar that sits next to the mayonnaise at the grocery store. Any way you slice (or shave) it, truffles occupy an odd corner of the culinary world. How can something be so humble and so high-end at the same time? And when did the truffle become such a widespread trend in consumer goods?

Truffles are part of the fungi kingdom, like mushrooms, but are much more rare and come in a number of varieties, explains the North American Truffle Growers’ Association. However, unlike mushrooms, truffles grow completely underground, which is part of what makes them so difficult to mass-produce. Whereas mushrooms have a portion above ground (the cap) that helps to spread their spores via the wind, truffles do not have that advantage. They can only spread their spores once they’re dug up by a forager, whether that’s a human or animal (and many animals simply eat the truffle once they discover it).

Truffles often emit a certain strong scent that attracts foragers. Truffle hunters have often used dogs or pigs, both of which have a great sense of smell, to track down truffles so they can be unearthed. The National Wildlife Federation notes that truffles are one of the most expensive foods in the world, and though there are many species, those most coveted in the United States are the Oregon white, brown, and black truffles, and the pecan truffle in the South. Outside the US, the more well known truffle varieties are the black truffle from France and the white truffle from Italy and Croatia.

Truffles have long been enjoyed in Europe, dating back to the ancient civilizations of Greeks and Romans and perhaps earlier. Masterclass writes that there is historical record that Babylonians foraged for truffles and Greek and Roman rulers enjoyed them as well. One Grecian philosopher, Plutarch of Chaperone, even believed truffles were created by the God Zeus when he struck an oak tree with his thunderbolt.

Since then, the rarity and difficulty of cultivating truffles has kept them a hot commodity. Despite the high price tag—or because of it—diners have continued to gobble them up over the centuries. A 2015 Nation’s Restaurant News article states that a particularly good harvest led to lower truffle prices while demand remained high, which only furthered the popularity of these earthy little fungi. From New York to Chicago to Atlanta to California, the article notes multiple high-end restaurants touting truffles on their menus.

What’s most interesting is how the truffles were reportedly used at all these restaurants. One location boasted a four-course dinner menu with black truffles as the highlight, while another offered a roasted chicken stuffed with foie gras, truffle, and brioche—but at the same time, others added truffles to their poutine, tater tots, and pizzas, challenging the notion that they must be paired with fine dining mainstays.

Why Are Truffles So Mainstream Now?

The progression of truffles from an ingredient strictly reserved for haute cuisine to something we sprinkle over tater tots is partially due to fluctuations in supply and demand. Where in 2015 truffles were seemingly everywhere, by 2021 the prices for truffles shot up. For example, a pound of white truffles from northern Italy was selling for between $4,500 to $5,000 wholesale at the time.

So then how are truffle products like Buffalo Wild Wings’ Truffalo sauce (truffle and buffalo sauce) and Shake Shack’s Black Truffle Burger and Fries able to proliferate? Well, because there aren’t always actual truffles involved, or at least not in the way we think. A New York Times article explains that although there are hundreds of species of truffles out there, only “about 10 have culinary value,” and not all products include those species.

Many truffle products also contain large amounts of salt, rice, or flour; these are added in the hopes that they will absorb and retain the truffle aroma that is so desired. However, when those ingredients fail to retain truffle-like properties, products are usually augmented with a chemical additive. Truffle oils are often flavored with bis(methylthio)methane and other chemicals. So while there may be bits of truffle in the jar for the product to market itself as “containing truffles,” they may not contribute much to the actual flavor of the product. Labels that boast truffle “aroma,” “flavor,” and “essence” are more than likely referring to chemical additives.

The truffle game is a tricky one, and though you may see the term often on menus or even in grocery aisles, it’s important to know that not all truffles are created equal.