It’s Truffle Season: What’s The Truth Behind The Luxury? 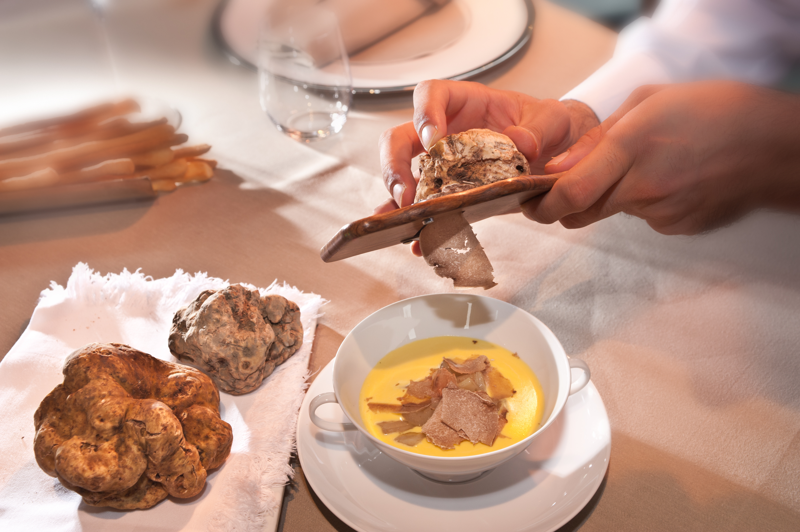 Truffles have become what the Michael Kors tote bag was to 2013: pricey, luxurious and highly sought-after, but also somehow seemingly absolutely everywhere. A feature on menus across the capital all year round, the famously rarefied fungus is in very high demand. So how is it possible that we can roll up to hundreds of restaurants and shops and order a dish of truffle pasta or chips or a bag of crisps for less than £10, when the current cost of the ingredient is an eye watering £6 per gram?

According to Bocca di Lupo restaurateur and truffle buff Jacob Kenedy, it’s because more often than not we’re being sold a falsehood. The oil that gives these dishes their truffle-like flavour likely contains little to no actual truffle at all. ‘Real truffles are mostly used when they are worth the most, which is when they are fresh,’ he says. ‘They’re good for at least a week, maybe two, if you keep them refrigerated. The oil first originated from placing gnarly or not great trimmings in oil to get some value from them. Now that is a cottage industry where tiny amounts are put out because a few decades ago someone figured out how to synthesise the chemicals that make truffles taste mostly of truffle, and so pretty much any oil you buy will be wholly synthetically flavoured, or have a flavouring and just enough real truffle to argue it’s real truffle.’

And don’t be fooled if you spot a few shavings on top, either, he continues. ‘Some places might flavour a dish with truffle oil and then put a bit of summer truffle or black truffle on top, which have almost no taste, to make it look like it’s got real truffle on it. It feels a bit deceptive to me, but on the other hand there’s nothing wrong with it because it has got truffle on it and it does taste of truffles, though it’s something to be aware of.’

Meera Cortesi, a truffle dealer supplying Fortnum & Mason, Panzer’s and Angela Hartnett, says that other than the obvious differences in price, the main way to tell if this earthy, garlicky, musky enigma is the real deal is to invest in training one’s taste buds. ‘The more you eat, the more you know,’ she says, ‘because there are very talented chefs out there who will still put a little drop of truffle oil in.’ Another way to ensure you’re getting the genuine article is to do your homework on the chef, she continues. ‘There are some chefs who on principle won’t touch any truffle products — The River Café, Angela Hartnett, Alain Ducasse — who never use anything apart from a truffle.’

Kenedy also believes that the best way to tell if something marketed as truffle is actual truffle or not is to know your seasons. ‘The white truffle season is very short, it comes from the end of October, normally through to December and there may be a few in January. White truffles are not so easily faked because they look quite distinctive. Black truffles of different guises are available for a lot of the year. There’s a spring truffle and a summer one, an autumn one that tastes of something, then there’s a winter one that’s very, very intense and expensive, almost as expensive as the white truffle. If you have a truffle dish outside of the winter time and it’s got a strong perfume, someone has probably added something synthetic.’ Although this isn’t always the case, he adds, so checking where they came from is key. ‘Australian winter truffles are great and they are available in the summer here.’

“If you have a truffle dish outside of the winter time and it’s got a strong perfume, someone has probably added something synthetic”

Financing an education in truffles doesn’t always have to cost the earth either, says Cortesi. ‘I know quite a few chefs and restaurateurs like Stevie Parle [of restaurants Joy and Pastaio] who always try to sell a truffle at cost because they feel they need to be able to have access to it and it shouldn’t just be the people who have a lot of money.’ And Kenedy, who also believes in the same principle, allows customers to bring their own truffles — or those he sells at his gelato shop Gelupo across the road — into Bocca di Lupo so customers can sprinkle the more cost-efficient version on whatever they like. ‘People then can have a truly authentic experience just as you would in Piedmont, where you’d buy a truffle, sit it on the table and shave it on whatever dish you want to eat it on. You can then use quite a lot at a lower price.’

This article was taken from: